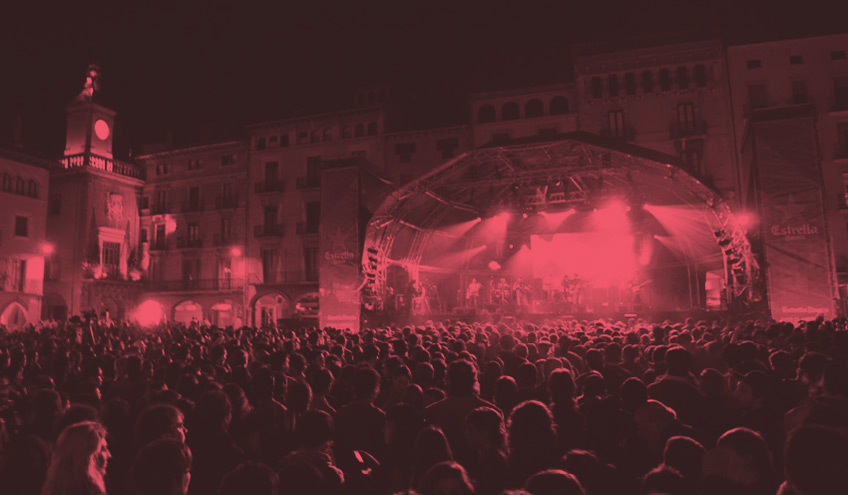 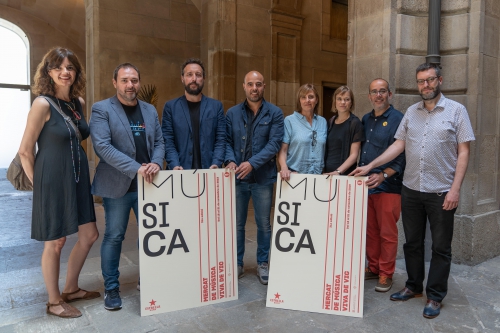 The Vic Live Music Market (MMVV in its Catalan initials) reaches its 31st year all set to celebrate its 30 years of existence. The city of Vic will once again be filled with music from 18 to 21 September. With artists, professionals from the sector and the general public that place their trust in the project. The aim, once again, is to offer a recognizable programme that at the same time has surprises in store. One of a kind, diverse and for all kinds of audiences.

For four days Vic will be visited by more than 70 artists, who will take to the nine stages with an intentionally diverse and open-minded agenda, designed for both events managers and art officers. Thirty artists will offer premières and pre-premières of their new material at the market this year.

The opening performance at the Atlàntida Theatre will be the première of the work entitled The Last Journey of Walter Benjamin by Juliane Heinemann, winner of the 2018 Puig-Porret Award. The winner of the 2019 Puig-Porret Award will be announced before the concert. Coinciding with the MMVV, the first awards ceremony of the Alícia Awards of the Catalan Academy of Music will be held on Saturday.

The forthcoming Market, with a Portuguese slant, will host a meeting of the Worldwide Music Festival Forum, while the Market programme’s ties with JUMP, the European Music Market Accelerator, will also be in evidence.

The Vic Live Music Market will begin on Wednesday 18 September at the Atlàntida Theatre with the première of the work entitled L’últim camí de Walter Benjamin (The Last Journey of Walter Benjamin) by Juliane Heinemann. The Berlin artist based in Barcelona, winner of the 2018 Puig-Porret Award, will introduce us to the German writer and philosopher on the 80th anniversary of his death. A journey with electronic music accompanied by texts by Catalan, Spanish and German poets such as Màrius Torres, Antonio Machado and Rainer Maria Rilke. The visual staging and the lighting designed by Cube will play a prominent role in the show. Juliane Heinemann will be accompanied by a talented band of improvisation musicians including Marcel·li Bayer, Jordi Matas, Marko Lohikari and Oriol Roca.

The programme combines the MMVV’s two parts, the market and the festival, with premières, pre-premières, concerts that invite the audience to discover new things and others with a more popular appeal, such as those in the Main Square and at El Sucre.

Nico Roig will perform his new album for the first time on Saturday. A show co-produced by the Vic Live Music Market, during which the audience will enjoy the experience wearing headphones. On Saturday, the Korean band Dul-da and the flamenco-jazz of Aurora will put on an unprecedented show seeking to sweep the audience away with a fusion of tradition and modernity.

Raül Refree will once again amaze the audience with Lina, a young talent. Together they’ll offer a performance combining the fado of the Portuguese singer and the visionary pop of the Catalan guitarist and pianist.

During the four days of the Market other groups such as Marcel Bagés + Phicus, The Bop Collective, Marianne Aya Omac, El diluvi, La chiva Gantiva, Hannah Willwood, Os amigos dos músicos, Boticelli Baby and Sonakay will be performing at the different venues.

Once again there’ll also be a Saturday programme for family audiences. In the morning there’ll be concerts by La fada despistada and  Marc Parrot and Eva Armisén. In the afternoon there’ll be performances by 2princesesbarbudes and Ruma.

As a result of the professional seminars organized by the Vic Live Music Market in Barcelona each year, which on this occasion will feature Portugal, the Portuguese groups O Gajo, P.L.I.N.T and Palankalama will perform this September. They’ll do so on Friday morning in the Auditorium, including presentations, interviews and meetings, and in the evening they’ll perform again at the Casino. On Thursday there’ll also be a concert by Portuguese bass player Jorge da Rocha.

The most popular stages at the MMVV will host the festival-style performances. The energetic Balkan Paradise Orchestra will kick off Friday evening in the Main Square, where Koers will then present their new rhythmic EP. The night in the square will end with Joan Garriga and El Mariatxi galàctic premiering their new project with the former leader of Dusminguet and La Troba Kung-Fú. At El Sucre we’ll be able to enjoy the multiple styles of Deva, the singer from Santander, reggae and dub by the duo Iseo & Dodosound from Navarre and, finally, Catalan trap by Lildami.

On Saturday evening there’ll be concerts by The Crab Apples, El Petit de Cal Eril and Dorian in the Main Square. And, at El Sucre, a session by DJ Ojete, a party with Búhos and reggae by Adala with The Same Song Band.

The MMVV will host the next meeting of the Worldwide Music Festival Forum, one of the most important music festival associations in the world. We will be visited by around twenty delegates from the FWMF. The excellent relationship between the Market and JUMP, the European Music Market Accelerator, will also be manifest in the programme. A new European project to provide support for emerging artists by means of fairs. ‘Why Portugal’ will also be presented.

This year, the activity will once again focus on Catalonia on Wednesday, on Spain on Thursday and on the international market on Friday, highlighting Portugal. The regional governments of Extremadura, the Basque Country and the Balearic Islands will present their activities in Vic, as well as the O Tonalidades Festival, the Lisbon MIL Fair and Focus Wales.

The Market will once again provide the setting for publicising what’s new among Catalan entities. On Friday the Musical Youth of Catalonia will present the catalogue of the Xarxa de Músique (Music Network). The first awards ceremony of the Alícia Awards of the Catalan Academy of Music will be held on Saturday. This year the winner of the Puig-Porret Award will be announced before the opening concert at the Atlàntida Theatre.